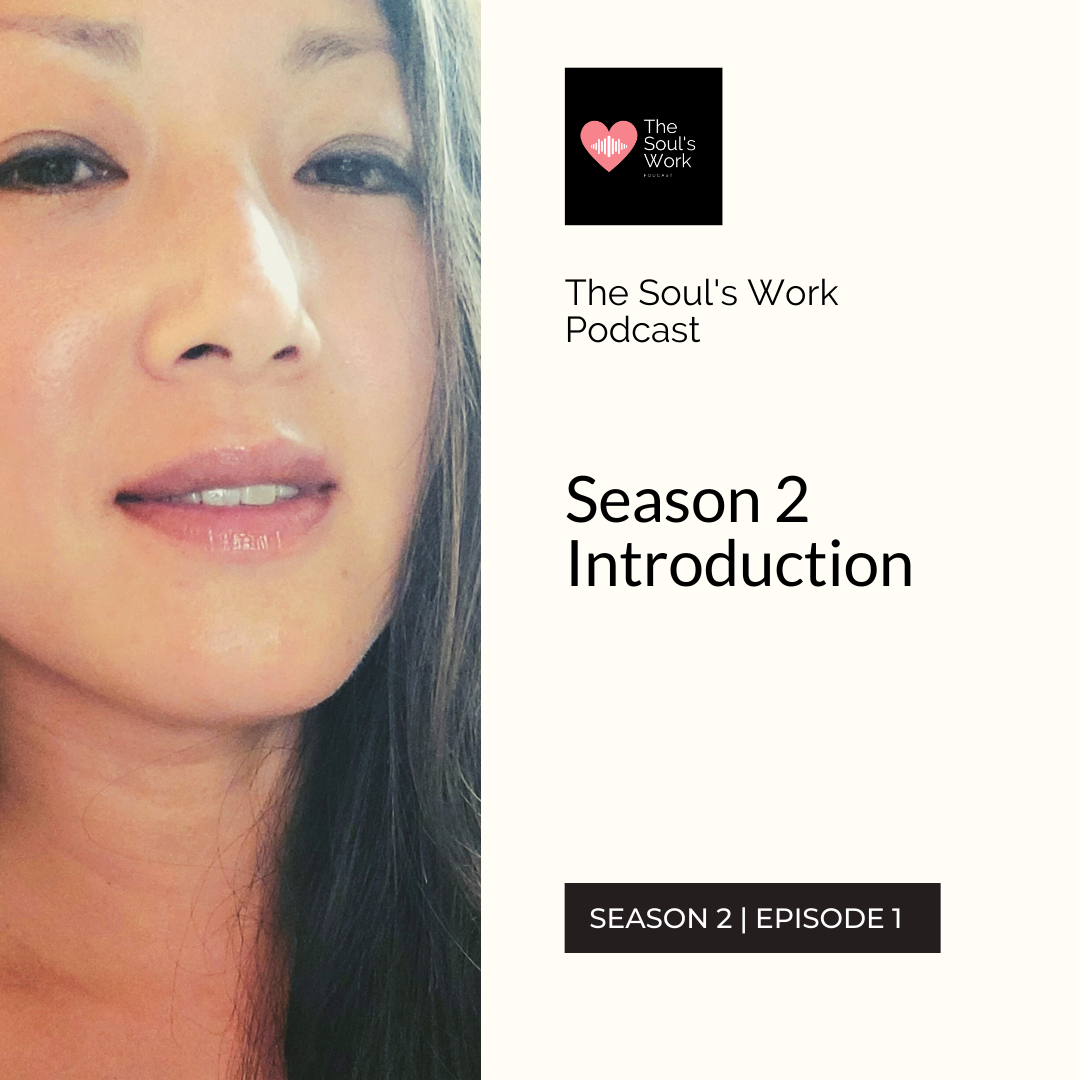 In the Introduction of The Soul's Work Podcast: Season 2, host Janice Ho welcomes you all back to the show and shares about her almost two-year hiatus off the mic. You'll get a sneak peek of the topics she'll be discussing this season, plus some background on her more journey exploring her relationship with alcohol.

In the Introduction of The Soul's Work Podcast: Season 2, host Janice Ho welcomes you all back to the show and shares a bit about her almost two-year hiatus off the mic. You'll get a sneak peek of the topics she'll be discussing this season, plus some background on her recent journey exploring her relationship with alcohol.

Rate & review the podcast on:

Listen to all The Soul's Work Podcast episodes: www.thesoulsworkpodcast.com

Hello, fam. It's so wonderful to be back on the mic after almost two years. That was one long hiatus, y’all. Well, I left Season 1 feeling like I needed to go do the work versus share about the work.

And specifically, I had already at that point been starting a deep dive into a lot of tough, oftentimes extremely painful inner work. I was learning a lot about my developmental traumas, my attachment wounds, and my body often felt like it was in survival mode, just trying to process all of the things that were coming up for me. So it wasn’t the time to share about it.

And now, almost two years later, there are still things that are too difficult for me to speak about publicly, but I’m definitely ready to share about some of the life-changing things I’ve learned since Season 1, because they have helped me so much, and if even one person can benefit from hearing about it, it’s worth it for me.

So, in Season 2, we’re going to dive into trauma, attachment styles, boundaries, the Mother Wound, intergenerational trauma, grounding self-care practices, grief, belonging, and so much more. Please remember that I’m not an expert, I’m not a professional. I'm not really here to teach, because I am very much a student – trust me – and it's more just about sharing some of my life experiences and learnings so that others might feel a little less alone in their own journeys.

So, I actually took some time to re-listen to all of my episodes in Season 1 (except for one I couldn’t bring myself to listen to), and I did this maybe a couple of months ago. And what I recall in re-listening to them is how much I didn’t yet know during Season 1. How much more expanded and nuanced my understanding has become about certain things like fear and alcohol dependency and self-care and relationships. So if you go back and listen to those episodes, please just keep that in mind. This is an ongoing process for me, and there is always so much more growth to be had.

But hold up, let me just take a moment to properly introduce myself, because maybe it’s your first time here. Maybe I haven’t had the pleasure of meeting your acquaintance. So my name is Janice, and I am a Korean-Canadian born and raised in Toronto, Ontario.

I am currently living smack in the middle of downtown, in what I call the concrete jungle. But for those of you who do know me, you know it's really hard for me to live in this kind of environment, because I am a nature girl at heart. And as to why I'm back here – because I actually haven’t lived downtown or even in Toronto really since the end of 2016 – long story, doesn’t really matter, but this is where I've been self-isolating for the last couple months, since mid-March when I came back to Canada back from Mexico.

So, I had been digital nomading since the end of October 2019, because I do work remotely as a freelancer – doing marketing and communications, copyediting, proofreading, project management, research, a lot of stuff – and it has always been my dream to travel and explore other parts of the world for longer than just two weeks of vacation a year. And so, I was in Costa Rica for 3 months, then Panama and California for 3 weeks each, and then I was in Mexico for 10 days before shit really hit the fan and I took a flight – well, two flights – back to Canada. So, here I am.

Exploring my relationship with alcohol

And it's been a bit of a rollercoaster dealing with COVID life, as I’m sure it has been for most of you. I won’t get into my entire experience with it right now, but I did want to just touch on one particular part of what’s been happening in my more recent life, and that is about my journey exploring my current relationship with alcohol. And this is a topic that I will touch on during each episode in Season 2, even if it’s just to give a little update on where I’m at with this.

Now, I actually talked extensively about my past relationship with alcohol in Season 1 of the podcast, Episode 11, "My Drinking Story," so you can go check that out to learn more about that. But just as a really short snapshot, in my late teens to my mid-20s, I had become quite dependent on alcohol, and although there was no way to see into my brain, it’s pretty clear to me that I had developed an addiction to it – going through the cycle of building tolerance, experiencing withdrawal, then the cravings, and, really, not being able to fully control my drinking.

And even if it wasn't necessarily the most severe case of addiction, it was absolutely problematic for me. And I had started out doing the typical binge drinking and going out partying and getting wasted all the time, although much more intensely than a lot of my friends. And then moving into drinking at home by myself to self-medicate from all of the stress and pain I was feeling, and that pretty much became a daily occurrence at some point.

Somewhere in my mid-20s was when many things in my life started turning around, including the drinking. But since sort of my late 20s to now, and I'm almost 38, I feel that even though in some respects it has felt like I do have more control over the drinking, that I can drink “in moderation,” that I've still always time and time again come back to this place of, okay, I am drinking for the wrong reasons; okay, I said I would only have one and I cannot seem to stop myself at just one; or that I do still get highly triggered by certain things. Like, even more recently, I’ve had to avoid watching certain shows on TV where I knew the characters are always drinking wine or scotch, my two favourite alcoholic beverages, because I’m afraid it will trigger me to want to drink.

So, basically, about a month ago, I had a night of over-drinking at home because I didn't want to feel the anxiety, the stress, the loneliness that was coming up for me at the time. And I just said fuck it, and didn't feel like having the willpower to just have one or two. And so I drank and drank and drank until maybe 2 in the morning. And the next day, had to take a moment to just look at what was going on here. And I made the decision to take a pause with my drinking until I can really make an educational and intentional decision that having a next drink would be an honest thing for me to do.

And so, here I am in that exploration. I've been doing a ton of education, listening to a lot of podcasts, learning about the neuroscience of addiction, doing an online course called the This Naked Mind Intensive – like, all the things. And it's been very, very empowering on one hand, because I’ve really been examining the beliefs that I’ve carried in my subconscious about alcohol for years, like how I can't live without it, and how life isn't going to be as enjoyable without it, that alcohol relieves me of feelings of anxiety or loneliness.

Yes, I have held these beliefs in my subconscious, because, of course, that's what happens when you become dependent on an addictive substance. And now I am really for the first time deeply challenging those beliefs, but doing so in a way that it's addressing them at the subconscious level. Because you can only fight subconscious beliefs with rational thinking for so long. It isn't sustainable.

So this current exploration with my drinking is a huge reason that I wanted to return to this podcast for Season 2. Because as I’ve been going through my personal journey with it, I haven’t been able to find one podcast led by a host identifying as Asian speaking on the specific topic of alcohol or drug dependency, addiction, whatever you want to refer to it as. And if you know of any, please give me a shout and let me know. But so far, I haven’t seen anything out there.

And trust me, that lack of public discussion is not due to there being a lack of problematic drinking within Asian cultures. So I really wanted to contribute my voice to the discussion. And it is important ... and it's not to say that the things that are being put out there aren't useful as well, they certainly are and have been absolutely instrumental in guiding me in this journey thus far. But also, it's important to see people who look like you kind of sharing their life experiences as well.

Alright, so that’s the introduction. I’m so excited to bring you the first full episode of Season 2 – tune into that next. Thank you so much for being here and listening in. If you want to connect with me, you can email me at janice.sj.ho@gmail.com. Let me know what else you'd like to hear on Season 2 of The Soul's Work Podcast.

You can follow me on Instagram @janicehoimages and @natureimmersed. And on Facebook at @thesoulsworkpodcast. We're gonna get this podcast back up on all the things, so look out for it on your favourite podcast player. But in the meantime, you can find all the episodes and show notes at www.thesoulsworkpodcast.com.

Alright, y'all, until next time, be well, stay safe, lots of love and self-love. Peace.